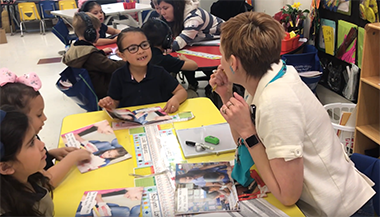 What is meant by letter identification?

Knowledge of the alphabet is “the recognition and naming of uppercase and lowercase letters and the paired associations between letter names and letter sounds” (Invernizzi & Buckrop, 2018, p. 86), as well as being able to form letters.  This is a huge task, as there are 40 distinctive shapes in letters to learn and children need to be able to automatically identify letters both in isolation and while reading and writing continuous text.  One important thing to remember is that children can learn these things while learning to read and write.  Before discussing letter instruction further, I want to emphasize that, according to Clay (2005), there are three ways to “know” a letter: by name, by sound, or by a word beginning with the letter.  This is important for teachers to remember since all three ways are useful.

Why is it important to teach (and continue to teach) letter identification?

You might say, “Well, of course I’m going to teach students their letters!”  I’d like to provide some research-based reasons why we teach letters, starting with Clay: “The critical distinction between any two words will be made at the level of letters” (2005, p. 23).  So, obviously, if children can’t discriminate letters, it will be quite difficult for them to discriminate words!

Children also need to recognize letters fluently.  Adams, in her seminal book Beginning to Read: Thinking and Learning About Print (1990), made it quite clear that letter recognition must be automatic for the whole reading process to function; otherwise readers read one letter at a time, which makes fluent reading impossible.  Prior to Adams’s book, Rumelhart and McClelland (1986) developed the Parallel Distributed Processing Model of reading, in which the orthographic processor recognizes print at – you guessed it – the letter level, by intaking the lines, curves, angles, and spaces of letters.  The more exposure to print a child has, the more efficiently the orthographic processor works.  The faster readers can recognize letters, the faster they can recognize words.

In what order should letters be taught?

I always advise teachers to not allow their basal series to dictate the order they teach letters!  Teachers know their children and can make these decisions by considering several dimensions of letter and letter-sound teaching.

Clay (2013), Ehri and Roberts (2006), and Stahl (2014) suggest that the teaching of letters needs to be efficient, structured, and cyclical.  It doesn’t make sense to teach letters in an arbitrary manner while not taking into account what students already know.  This wastes precious classroom time!

Invernizzi and Buckrop (2018) advise teachers to take the following into account: the child’s own-name advantage, alphabetical letter advantage, letter-name and letter-sound relationship advantage, and letter frequency advantage.  Children are quicker to learn letters in their names (Treiman & Broderick, 1998).  Placement in the alphabet also makes a difference.  Justice, Pence, Bowles, and Wiggins (2006) found that children are more likely to learn the letters near the beginning of the alphabet first.  Children also learn the letters whose sound is similar to the letter name (the letter b) faster than they learn the letters whose sounds are quite different (the letter w) (Treiman & Broderick).

What are some research-based strategies for working with letters?

There are four key components of effective letter identification teaching.  First, ongoing assessment is crucial so that the teacher knows which letters have speedy responses and which ones need more attention.  Second, consistent practice and rehearsal are needed to ensure fluency and overlearning (Ehri & Roberts, 2006).  Third, explicit and engaging teaching of letters through mini lessons is necessary and it is recommended that teachers use the word “letter” consistently.  I have observed many children who display confusions between “letters” and “words,” even when the teacher had no idea this was an issue, which is why administering a print concepts assessment is essential. Finally, informal experiences with letters are, of course, just as important as formal ones.  These include singing the alphabet song, writing names and lists, and noticing letters as they appear in the children’s environment.

Some isolated letter work is recommended (and necessary).  Here are a few suggestions to make the most out of this type of instruction:

Every time I work with children on letter identification and formation, we return to a text together to locate the letter or letters that were our focus (Stahl, 2014).  We may look at a book or other piece of writing that was used for shared reading, a book used for guided reading, or a piece of writing completed by the class during interactive or shared writing.  This is a component of the letter study lesson that shouldn’t be overlooked, as we want children to understand that letters make up a part of the bigger picture of reading and writing.

Materials for letter instruction need not be fancy!  It’s not necessary to have a cabinet full of store-bought materials.  The monetary investment really needs to be in magnetic letters. Magnetic letters are colorful, three-dimensional, and tactile, allowing children to interact with them and get to know their shapes and features.  I prefer the foam letters that have the entire backing covered with a magnet because these don’t slip and slide like the other, less expensive letters.  For table use, the plastic letters that have the ridges are preferable.  Letter charts are also handy tools, as long the letters are clear and the images are simple and uncluttered.

I also recommend the use of alphabet books.  The alphabet books I am referring to are those that have one letter and picture per page. You can also use “letter books,” books devoted to one letter, with the letter on every left page and a picture that begins with that letter on the right page.  You can make one and photocopy others to keep near your small-group table or in literacy work stations.

How do we deal with confusions and reversals?

Learning letters is difficult!  “Letters change their identity if you turn them around the wrong way…That is a very difficult thing for the child to learn. What have been called reversals might be looked upon as behaviors found in a child who believes that shapes have constancy no matter what their orientation. That is true for objects in his environment so why should it not be true for letters that he is learning?” (Clay, 1991, p. 277).

Do not present similar letters side-by-side!  Give the children some time to get to know one letter solidly before proceeding with the one that is almost identical to it.  It’s easier (and more efficient) to teach the more obvious distinctions of letters than it is the least obvious.  This means teaching b with letters like s, m, and z, rather than teaching b with d and p!  This is to prevent, as much as possible, incorrect responses (Clay, 2005).  When children are writing, provide them with a magnetic letter reminder and step in when you need to.  Writing a letter incorrectly (when it forms another letter, especially) is a habit we want to eliminate.

Red Rocket Readers have many resources for letter teaching

All books available for emergent readers have clear font and large spaces between words to make it easier for children to locate and isolate letters in the text.
The Alphabet Explorers Set (Lilac) is a wonderful resource (see information on letter books above). This set features individual titles for each letter of the alphabet, plus four that focus on key digraphs.
In the books at the Pre-Reading Level (Pink), focus letters are presented in a story context. The focus letters are red within the text, while the remainder of the letters in the word are black. 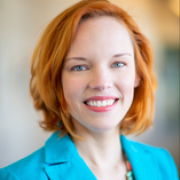 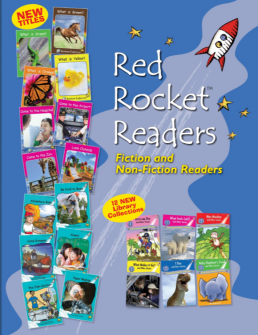